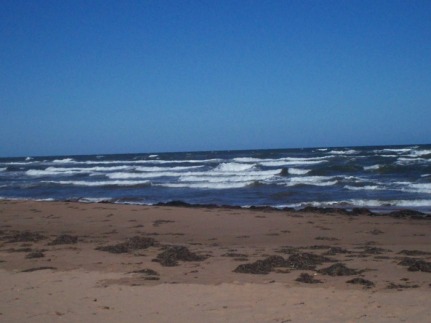 This is the beach where I found the sea glass that your jewellery was made from. Souris Beach PEI Canada

Join me on the beach and see what you can find!

FIND THE SEAGLASS IN THE PHOTO 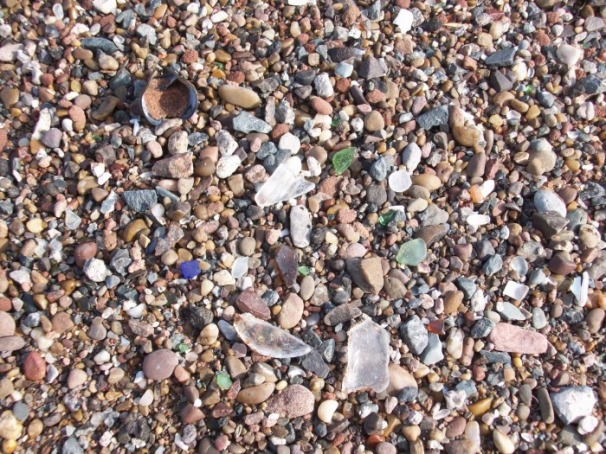 Look carefully there are many pieces to be found.
When looking for seaglass look in the rocky gravel area of the beach.

The Waves Wind And Water Wash It Ashore 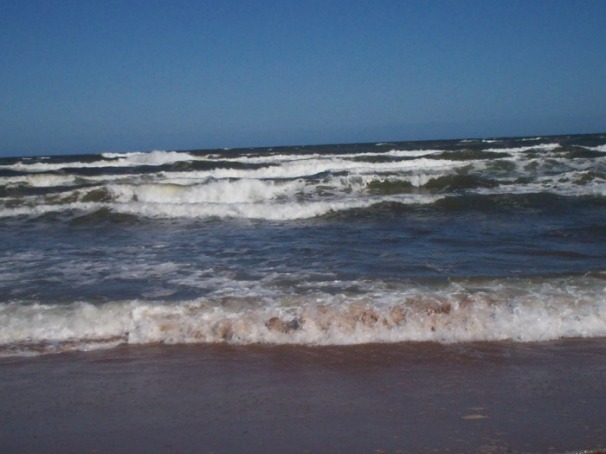 Treasure from the deep are washed to our feet from past lives unknown... That is the mystery of seaglass.

Where did it come from? 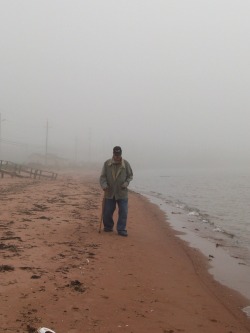 Walking in the fog... Looking for treasures 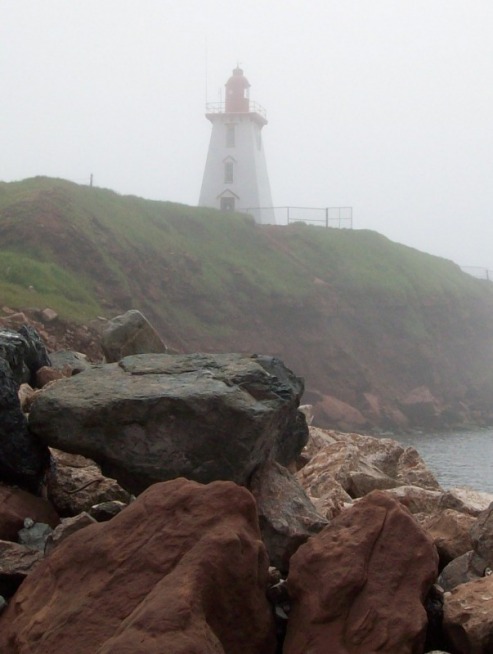 When the fog lifts and the tide goes out the seaglass appears like treasures in the sand just for you to find. 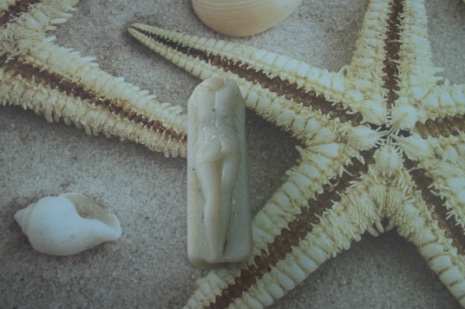 It is a Navy Burial at Sea Cross from the Second World War. It washed ashore and I was fortunate enough to find it. I won first prize at the Mermaid Tears Seaglass Festival for this rare find, I had it blessed and dropped it deep sea back into its final watery resting place again. Whoever this cross belonged to was remembered every time it was held or viewed at PEI SEAGLASS STORE. I felt it needed to be returned to the ocean, I was honored to have and hold it again for awhile. Whatever reason it washed to Souris Beach PEI or where it came from we will never know! 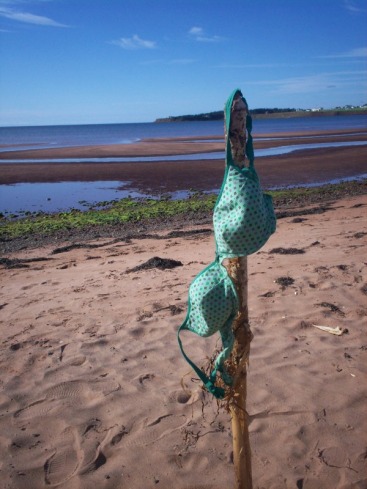 Found this also... Anyone recognize it?

Pottery, Milk Glass, Bottle Stoppers and Marble are a rare find as well.

The joy of seaglass is the mystery behind it. Where did it come from and how old is it?
We will never know for sure and I guess that what makes it TREASURES FROM THE DEEP! 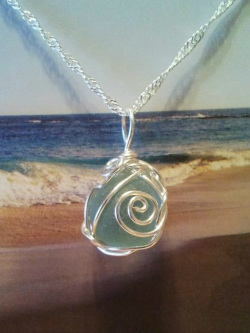 Each piece is unique in size, shape and color... Enjoy one today
Sunset on the eve of another day of seaglassing. 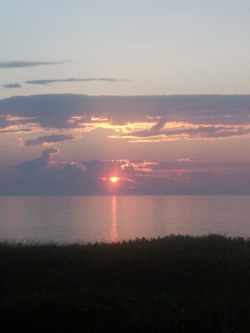 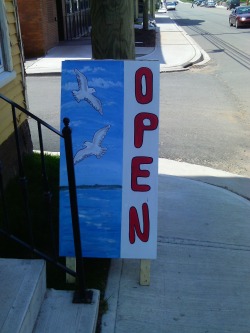 We welcome your visit to our store

100 Main Street Souris PEI
THE PEI SEAGLASS STORE
Plan to spend at least an hour... there is so much to see.

Come see for yourself.... The PEI SEAGLASS STORE  Is a Hidden Treasure.
BEST PRICES ON SEAGLASS IN SOURIS PEI 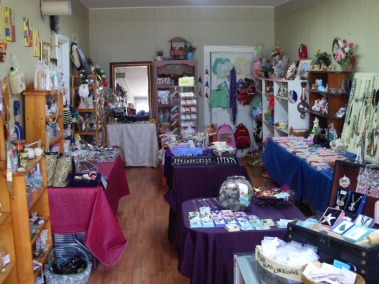 Eastern PEI is a Hidden Treasure...... SHHH we dont tell anyone how beautiful it is...
We keep it all to ourselves to enjoy.
But the word is spreading like Wildfire.
Come see for yourself! 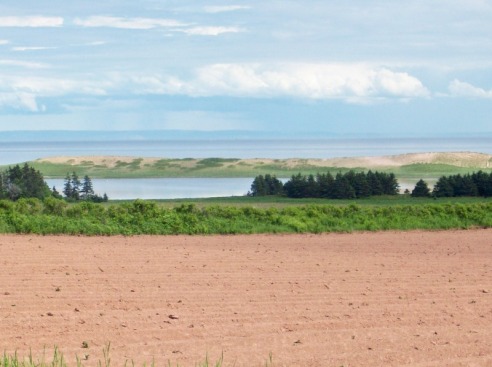 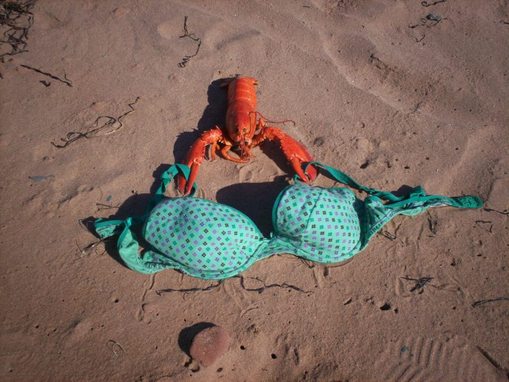 WOW  My private beach... Basin Head has no seaglass on it. It is too sandy with no rocks to catch the seaglass and has a deep drop off this stops the glass from washing ashore. 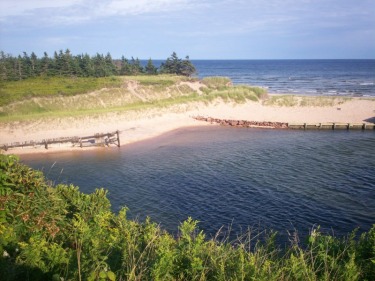 Only footprints left behind. Not a worry in the world can find me here! This is the only beach I walk on without looking down... 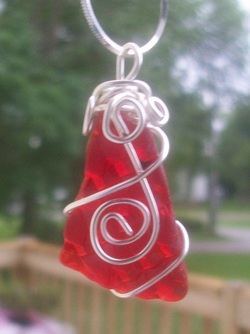 This is my treasure found on Souris Beach... NOT FOR SALE... I was offered $500 for this beauty and refused... sometimes its not just about the money.
It took me so long to find this how could I ever sell it.

This piece is very rare. It is from a brake light of an old car.... I wonder was it a Dodge or Ford? 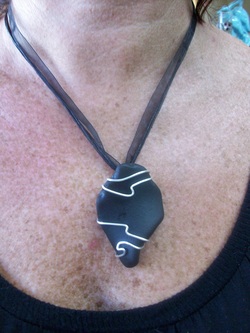 This seaglass was found and the owner wanted it wrapped into a pendant. It is beautiful.
See you can wear big pieces!!
Check out the ones you pass as rocks... It could be black rum running  seaglass.
Seaglass, Souris Seaglass, PEI Seaglass, Seaglass Jewellery, Seaglass Jewelry, Ship wreck Glass